Movement 515 Ends a Big Year with a Big Show 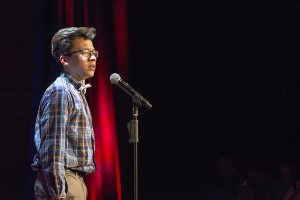 After coming within a fraction of a point of advancing to the finals of last month’s 18th annual Brave New Voices International Youth Poetry Festival in Atlanta the DMPS team of spoken word warriors is treating the home folks to a showcase of their festival repertoire tomorrow night in a showcase event at the Temple for Performing Arts. The show starts at 6:30. Admission is $5 for adults and $1 for students.

The outspoken team is brash and dazzling. Brazzle is a brave, new word to describe them, as in Elhondra Brazzle, one of three of the six team members who will be back to contend for a spot on next year’s squad. She’ll be a junior at East as of next week. Courtnei Caldwell will be a senior at Hoover and Julio Delgadillo, the local Grand Slam Champion from North and one of the veterans of the program, is still only a junior despite his years of experience.

Graduated team members are off to college. Hoover’s Susan Stacy is bound for Cornell College in Mount Vernon. Hatte Kelly goes to the University of Iowa from North where she’ll reunite with Leah Waughtal, a former team stalwart who returned to coach this summer’s team as the Movement 515 leadership team expands to include charter members who are now alums. And Apple Amos from East is moving on to Iowa State University.

“We reached 564 students in the district last year through our six programs,” said Kristopher Rollins who, along with his partner in all things, Emily Lang, launched M515 several years ago when they both taught at Harding Middle School. Now they preside over a high school curriculum in Urban Leadership at Central Campus. The programs he alluded to have branched out to also include a half-pint poetry cohort at the elementary level and street art workshops. ”Our weekly spoken word workshop at the Des Moines Social Club averaged approximately 80 youth per week,” Rollins added, sounding like the proud parent he literally became just before leading the team to Atlanta when Lang gave birth to their daughter Ruby. The next generation is on its way.

The fire-breathing sextet that represented the program and the district and the city in Atlanta this summer combined to advance to the elite eight out of 60 teams comprised of more than 600 students from the United States, Canada, Africa, the Polynesian Islands and Europe, “making BNV the largest and most diverse ongoing spoken word event in the world,” according to the festival website. The youth convene to join forces as well as compete with one another. In four short years DMPS has gone from non-competing observers in San Francisco to novice competitors in Chicago to invited performers at the opening ceremonies in Philadelphia to within a whisker; a split hair, of a coveted spot on the finals stage in Atlanta.

The 2016 BNV Festival will be at an as yet undetermined location in the southwest (Houston, Austin, Tucson and Albuquerque are possible sites). Wherever it lands DMPS will be there, a poetic tour de fierce to be reckoned with worldwide.