Student Filmmaker Honored for her Work 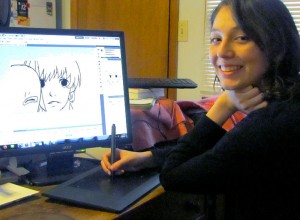 Nearly sixty films were submitted for consideration, but only thirty were given Official Selection status.  These films were viewed by the public and went on to compete for Gold and Silver Eddy Awards.

Alexandrea’s animation contained 391 digitally hand-sketched frames and was entitled “Home.”  The judging panel rewarded her efforts with a silver Eddy and a $1000 scholarship provided by the Collins Road Theatre in Cedar Rapids.  Alex plans to study Japanese and animation after her graduation this spring.