Eleven student entries from the Central Campus Broadcasting and Film Program were selected for screening at the Cedar Rapids Independent Film Festival held April 17th and 18th.  The festival showcased the work of filmmakers from across the state and around the country, all with strong connections to Iowa. A panel of judges awarded 58 filmmakers with Official Selection status. “It was another fine crop of films this year. We are proud to showcase some great Iowa filmmakers,” said festival founder and director Scott Chrisman. These films went on to compete for Gold and Silver Eddy Awards.  Winners from Central Campus include Trevor Spidle (Lincoln) for his skateboard montage, Davis Evans (SE Polk) for his long form video entitled, “Them,” and Anna Steenson (Roosevelt) for her stop-animation video, “Blackbird.”   In the words of their instructor Tim Coleman, “This is the strongest showing our program has had at this local festival with awards in three categories representing seven of our students. We are certainly proud of their achievements and their professionalism.”  All of the festival work can be viewed on the program’s YouTube channel at ccbroadcastfilm.  Other Central Campus entrants recognized for festival screening include Jack Chasse (RHS), Jonah Kruse (RHS), Tyler Stone (RHS), and Helena Gruensteidl (RHS).  Congratulations to all of these budding filmmakers. 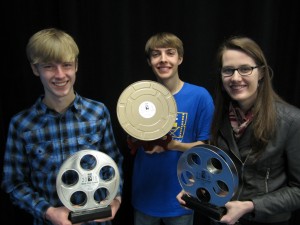