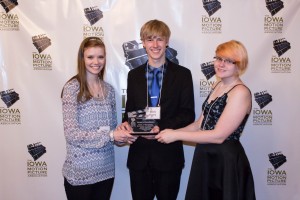 Davis Evans (middle) pauses on the red carpet with his Award of Excellence at the Iowa Motion Picture Awards.  Kara Richards (left) and Rachel Augustine (right) were cast members in the film entitled “Them.”

The Iowa Motion Picture Awards were held May 2nd at the Pella Opera House, and going home with the top prize in the student category was Davis Evans.  Davis is a Central Campus senior from Southeast Polk enrolled in Broadcasting and Film.  Using the aid of approximately ten crew members, he crafted a sixteen minute sci-fi story that continues to capture the attention of local festivals.  “The awards night in Pella was special and I’m honored,” said Evans. “I want to thank the students that helped me put this together, and also thanks to Mr. Coleman at Central Campus for helping me troubleshoot the scripting and storytelling elements of the film.”  The Iowa Motion Picture Association (IMPA) has a history of recognizing young filmmakers with their awards night.  It is also a night recognizing Iowa’s professionals in the industry.  You can see the film made by Davis on the internet at the following link:   https://www.youtube.com/watch?v=vjvr-Evd4LY