Searching for the Fuzzy Nautilus – a Blog by Dr. Greg Barord

Over the summer, Dr. Greg Barord joined an expedition to find an elusive sea creature-The Fuzzy Nautilus. Over the next few weeks will be sharing excerpts from his blog. Here is the first installment! 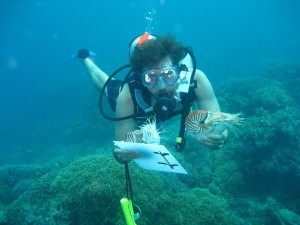 Gregory Barord diving with two nautiluses (Nautilus pompilius) in Panglao, Philippines in 2011 during one of the first, if not the first, in situ behavioral experiments. (Photo by Anthony Ilano)

Flash back to 2011 when Dr. Peter Ward (University of Washington) and I arrived in the Philippines to start our first nautilus expedition together. We had a “simple” goal: to find out how many nautiluses are left. Decades of unregulated nautilus fishing has cast doubt as to whether or not these fisheries are sustainable. Several areas, at least, have experienced significant declines, some to local extinction.

However, before developing management plans to protect nautiluses from extinction, we must first find out what their current populations sizes are. Of course, this project is an international collaboration of researchers, students, fishermen, governmental agencies, conservation organizations, and community members.

Off to Papua New Guinea 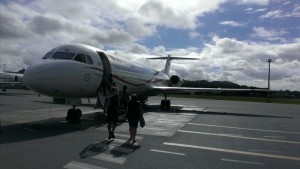 Most recently, we traveled to Papua New Guinea in search of the rarest of all nautiluses, Allonautilus scrobiculatus, also known as the fuzzy nautilus. This nautilus is only known from a handful of islands, near Manus Province of Papua New Guinea.

The last two scientists to see Allonautilus were Dr. Bruce Saunders and Peter 31 years ago in 1984. While the shells have washed up on beaches over the last three decades, no scientists have seen the living animal since 1984. With support from National Geographic, United States National Science Foundation, The Nature Conservancy, Minnesota Zoo, and the American Museum of Natural History, we set out to find out if Allonautilus was still alive. 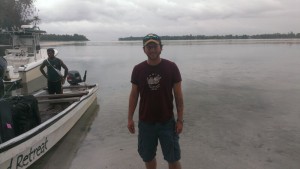 Arriving in Kavieng after traveling by car, plane, and boat. (Photo by Richard Hamilton)

The first place we went to in Papua New Guinea was Kavieng. Shells of Allonautilus wash up on shore consistently but no one had seen the live animal there. So, we wanted to find out if it was there.

For the next three weeks, we searched for Allonautilus, its cousin Nautilus, met new people, tried new food, and tried hard to not get sunburns or malaria.

CHECK BACK NEXT WEEK FOR MORE ON DR. BARORD’S DISCOVERY!