Using a unique prospective to engage students and help them distinguish various educational philosophies, Mrs. Carole Henning created a “philosophy mall”. Urban Teacher Academy had the opportunity to learn how to distinguish the various educational philosophies is tough and just reading about it from a text is pretty dry, so we jazzed it up a bit with a trip to the “philosophy mall.”

Students were given 4 pennies and were asked to shop for four statements (slips of paper deposited in 16 different cups around the room) that “fit” them and their beliefs about schools, teachers, and instruction. After each student had made a “purchase,” they compared the numbered slips they had selected with a constellation of statements that fit into each of the major educational philosophies: perennialism, essentialism, progressivism, and social reconstructionism.

No students found themselves entirely aligned with any one philosophy (no one had four statements completely in alignment with one philosophy), but they grouped themselves by their strongest connections in terms of the statements they had “purchased.” Once groups were formed in this fashion, each group was responsible for reading about their chosen philosophy from our text and preparing a brief explanation of what that philosophy was about. After they studied up, they shared these explanations with the entire class. 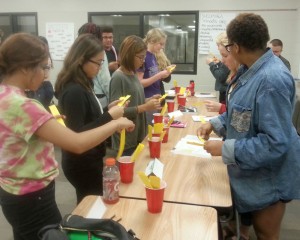 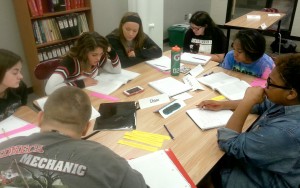