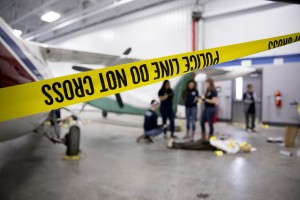 The wave of mock, repeat, mock homicides at Central Campus continued this morning when three victims were found in the district’s new aviation facility on County Line Road.

No sooner had charges been filed in connection with last October’s (mock) murder on the Central Campus premises at 1800 Grand Avenue (read about it here) than Captain Kelly Willis, instructor Greg (Tech) Gourd and their students in the Central Campus Criminal Justice program were dispatched to another grisly crime scene to investigate.

The shocking news that Central’s Assistant Director Aiddy Phomvisay will be charged with last fall’s crime hadn’t even sunk in when a 911 call came in to DMPD Dispatch early Monday. A maintenance worker at the aviation lab reported finding three bodies in the hangar area; two adult males and one adult female. The victims were later identified as Irma Strangelove, her husband Sebastian Strangelove and Will Fixit. According to unconfirmed reports Irma Strangelove and Fixit were coworkers in the aviation program.

When student investigators arrived on the scene approximately 9:00 AM they found evidence of a violent chain of events. Blood, shell casings, whiskey bottles and apparent murder weapons were among many items that were tagged and catalogued. Later the CJ students were joined by Central biotech teacher Kacia Cain and her students who will assist in the forensics analysis of blood and hair samples gathered at the scene.

Among the onlookers, appearing to be anything but guilty, was a grinning Phomvisay who seemed pleased to confirm that yes, the students “solved” last semester’s killing when “they found evidence that was planted in my office.”

Tech Gourd was busy coordinating the three investigative teams of students and explaining to the media that this case is more complicated than the last starting with the fact that there are three victims instead of only one.

Meanwhile students donned their latex gloves and combed the grounds with cameras, flashlights, laser pointers, evidence placards, sketch pads and tweezers. Junior Carson Jones had a sharp pencil behind one ear like a holstered handgun as he probed for clues. Last fall he told us that he enrolled in the new-this-year Criminal Justice curriculum with the intention of following an uncle into law enforcement. Now that he’s had a semester plus of exposure to the meticulous, often tedious work that is the essence of such work has his mind been changed or his appetite whetted?

“I love this class,” he said standing over a mannequin with a screwdriver protruding from its chest. “I wasn’t sure what to expect when I enrolled but it’s even better than I hoped it would be.”

From his perspective as the program’s forensics expert Gourd feels much the same. Retired from a 30-year career with the DMPD, he says he’s getting more than he bargained for when he agreed to help fellow DMPD retiree Willis launch an instructional effort they both hope will steer students into a variety of public service fields.

“Teaching is actually more fulfilling than my police career in some ways,” he said. “These students are doing great work and I am very proud of them.”

Everyone was so upbeat that it hardly felt like the scene of a triple homicide. But again, the key word here is mock. It’s not like anyone actually died. Central Campus may be known for hands-on experience in real world occupations ranging from culinary arts to marine biology but when it comes to criminal justice, complete authenticity can wait.