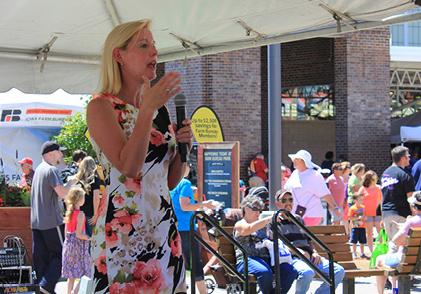 Central Campus Anatomy & Physiology/Genetics & Microbiology instructor Kacia Cain, member of the STEM Council, helped launch the I.O.W.A. STEM Teacher Award at STEM Day at the Iowa State Fair as a past recipient herself.

The Iowa Governor’s STEM Advisory Council announced Central Campus instructor Kacia Cain as this month’s MVP for Iowa STEM. Ms. Cain sees her role within the STEM Council as one who conveys potential barriers or problems against Iowa STEM growth to a mixed team of experts who know how to take them down or find pathways around them.

As an instructor at Des Moines Public School‘s Central Campus, Ms. Cain introduces her students to the worlds of anatomy, physiology, genetics and microbiology. Her role as a STEM teacher landed her a spot on the STEM Council and Executive Committee in September 2013 where she has since served on the Business Engagement Committee that built the “Guidelines for School+Business Partnerships in STEM” and contributed to the STEM Council’s Seal of Approval.

“I work to remind everyone that teachers would love to do all of these great ideas we come up with, but there are restrictions that won’t allow them to do them right away,” Cain said. “Luckily, there are influential people on the STEM Council who are on the other side of these barriers who can work together to get rid of them once they are aware that they exist.”

Along with the educator perspective she brings to the table, Cain earned the 2015 I.O.W.A. STEM Teacher Award, and she volunteers, when able, at STEM Council information booths at various state conferences. Kacia was instrumental in arranging for Central Campus to open its doors to a Strategic America camera crew who helped create four new career vignettes.

“Kacia Cain continues to be integral as one of the reasons why Central Campus is nationally recognized as Iowa’s Premier Regional Academy for Advance Career Programs,” states Central Campus Director Aiddy K. Phomvisay. “We are very fortunate to have her teach our diverse student population from over two dozen school districts in central Iowa. All of us at Central Campus congratulate Ms. Cain receiving this well-deserved honor.”

Cain said she has always believed that STEM is about building partnerships through links beyond school walls and is excited to be a part of a group in a state that puts that idea at the forefront.

“The more connections that exist between a business or higher education and a classroom in that subject area, the more students will succeed and realize that STEM is a place where they want to be, building Iowa’s workforce,” Cain said.