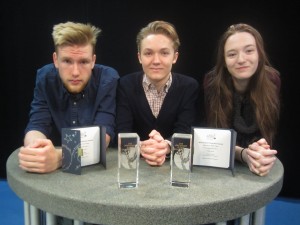 Congratulations to 2016 graduates Brock Stillmunks, Finn Pilcher, and Helena Gruensteidl as their short film from their senior year, “Starfish Academy,” is nominated for the National Student Production Awards at The National Academy of Television Arts & Sciences. Earlier this year, they won a crystal pillar at the Upper Midwest Chapter – Student Awards.

They are one of seven nominees from the Upper Midwest Chapter, each representing different film categories. Also, they are the only Iowa filmmaking production team nominated.

The National Student Production Awards include 23 programming and craft categories. Honorees will receive a certificate from NATAS and a crystal pillar national award with the Emmy® logo will be presented to the school. Live streaming of this event will begin at 11:30pm (CST) on October 4, 2016 and will be available at https://livestream.com/tndv-television/StudentProductionAwards

Our filmmakers received their regional award during the April 2016 Upper Midwest Student Awards in Minneapolis sponsored by the National Academy of Television Arts & Science.

Producer Brock Stillmunks stated at that time, “We are honored to have our work recognized outside of Iowa and we’re glad that Central Campus allowed us the opportunity to use these industry skills in a competitive atmosphere.”