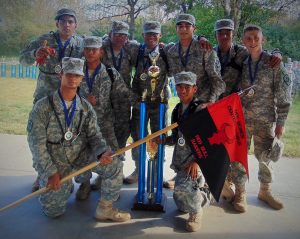 At the end of Saturday, the Red bull Raiders came out on top of the other teams. “We worked hard and as a team it showed, this sets the bar high for our expectations when we compete against over two dozen other programs at the Smith-Cotton Meet next weekend in Sedalia Missouri,” noted Red Bull Battalion Commander Daniel Allen. “A special thanks to the Iowa Army National Guard for allowing us to host this meet.”

The meet exemplifies the outstanding qualities of the cadets who make up the Red Bull Battalion JROTC at Central Campus. The Army JROTC program is the largest in Iowa, with over 300 students receiving the training and experience in leadership and service which will carry them through happier, more success lives and careers.